If you want to get the full attention of everyone involved with a construction project, send an email with a subject line that says "Low Cylinder Breaks."  This is because the cost of low breaks could be tremendous if replacement is the only acceptable remedy.   But is that true?  What is a "low break?' And when is a low break a real concern?

First, the acceptance of concrete, when a strength requirement is specified, is determine by using standard cured test specimens which are typically tested at an age of 28 days.  Because of the nature of any form of test, the result should never be based on one specimen break but rather on the average of 2 or 3 breaks.  Because of normal variations in concrete and testing, ACI 318 and ACI 301 both recognize that  1%-2% of test results will be usually be low, just do to the statistical nature of sampling and testing.

Because of this statistical variation, concrete with specified strength of less than 5000 psi (35 MPa) is acceptable if:
There are many reasons why strength results could be low.  But low breaks are usually do to one of the following factors:
When low-breaks, beyond what is deemed "acceptable" by ACI 318 and ACI 301, the cause of the low break should be determined.
​If issues are discovered with regard to testing issues such as those above, then consider the fact that the test results are not likely to reflect the true potential strength of the concrete in question.

Next, review the history of slump and air content and determine if the batch-to-batch variability is acceptable.  Then compare it to the batch in question.

Finally, consider the actual required strength and criticality of the strength of the location in question to decide how to proceed.  And are there acceptable options other than removal.

Some options are:
RESOURCES 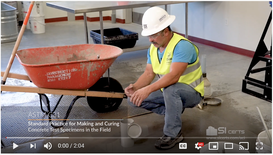